”An emotion is a transformation of the world. When the paths before us become too difficult, or when we cannot see our way, we can no longer put up with such an exacting and difficult world. All ways are barred and nevertheless we must act. So then we try to change the world; that is, to live it as though the relation between things and their potentialities were not governed by deterministic processes but by magic”. –  Jean-Paul Sartre, Esquisse d’une théorie des émotions

I ask myself from which end I’m going to start telling this story. From the right to the left, from  top to down? One thing I know is that one way leads to the other, and it is all connected, it is all interconnected. You have to follow the bread crumbs. It is like a wire thread through a web of thoughts. Is it a red, linear tread? or is it a big tangle? We can zoom into details or we’ll zoom out on the world. A close up or find a view far, far from away.  Maybe it doesn’t matter where we start?

“I’m not going to tell you it will be okay”, is a start, a first step. You might think this exhibition is about me and of course it is . But as everything else is not that simple. Of course I’m present. I am telling you something, I am suggesting something and you can see me in the images, but I’m really just a starting point, one perspective, an angle for anyone who wants to approach me and my works in this exhibition. But the ‘I’ is not the important thing, I’m just one layer of all the many layers.

After all these years I’ve worked with art I have come to understand  that what I’m doing is documentation of events. I depict, communicate situations, personal reactions and thoughts, through documentation. The “I” is a starting point when I’m trying to make sense of the world. It is tentative steps among all the mess I see and experience with a hope that others also can recognise themselves in this mess. It’s bubbles of thoughts that meet and interact. Bubbles that open up to each other, open up to what the other bubbles can offer. One thought leads to another. It is bread crumbs to follow.

The second step or crumble could be the sentence. ‘l’ennui est contre-révolutionnaire’, boredom is counter-revolutionary. When Guy Debord wrote that sentence in 1962, it was strongly linked to a Marxist thought. He lived in a turbulent political time and the question he asked was, ‘who can afford to be bored’?  And even today, we have to ask ourself that question.

“English has many words for the feelings that can arise when a good, hard look at the state of the world seems to reveal only negatives. Hopelessness, despair, depression, discouragement, melancholy, sorrow, worry, disconsolation, distress, anxiety …there are so many that it would hardly seem necessary to borrow any more from other languages. But English never hesitates to borrow words that would lose certain subtleties in translation, and angst, ennui, and weltschmerz have made their way into English by offering a little something extra.” – “How to Tell Whether You’ve Got Angst, Ennui, or Weltschmerz”, Arika Orent

”…we can tentatively define ennui as the state of emptiness that the soul feels when it is deprived of interest in action, life, and the world (be it this world or another), a condition that is the immediate consequence of the encounter with nothingness, and has as an immediate effect a disaffection with reality.” — From “The Demon of Noontide: Ennui in Western Literature”, Reinhard Clifford Kuhn

And of course we must fight that feeling. Everything else will be counter-revolutionary.

The central question for Guy Debord was how can people find meaning and purpose in a modern world, a world that distanced people not only from their work but from their experience of life as well. He believed that play and spontaneity were the cornerstones required for a complete life. To be bored to them was a modern phenomenon, a modern form of control.

”Boredom is counter-revolutionary”  is to me  a fight against boredom, ennuie and weltsmertz,  there is always an on going revolution. Revolution is a political weapon, but it is also something taking place on a personal level. Can you separate the political from the private? no, I don’t think so. The personal is political. I can either curl up in a fetal position and give up and let myself be eaten by ennuie, angst and weltsmertz or I’ll tell myself to go and try to dance Bhangra, alone in a forest. Of course that act becomes political in a world where to unsuccessfully dance alone in the forest or write some lines of poetry is an act opposite to the demand on you to be a perfect member and productive citizen of our society. Is art meaningful? yes, and it can act at different levels, and the revolution takes place on different places and in different ways.

How do I tell my story and why do I tell it with words? Is not images enough? Well, in the same way I discover over the years that I document I realise that words and languages are always present in my work. Language, words, text and it’s function and the hierarchies between the image and the word. To understand and not understand, insecurity and the questions of dependence and independence. It is all interconnected an it can always have a double meaning.

So, this text could be starting point to the open dialogue and, as Umberto Eco describes it in its essay ‘open work’.

”…Open work has two constituents: a) multiplicity of meanings and the participation of audience. Artists generate the work of art allowing the audience to fabricate numerous meanings. Work of art as an open work is contingent and the openness toward meaning determines its contingency. A work of art may be open from the audience point of view because interpretation is encompassing and occurs at various levels of human perception. Thus we perceive meanings in a work of art with various perspectives.”

”This kind of “openness” is derived from the science of the time, he says. When people believed in a geocentric world, they expected every work of art to have only one definitive interpretation, but as people found out about the universe and the magnitude of stars in the sky and their hierarchy, they began to expect more ideas to be interpreted from every work” – The Role of the Reader: Explorations in the Semiotics of Texts, Umberto Eco

So the work in this exhibition is a bread crumb to something more. Artistic work is an uncovering and revealing process. One layer after the other. It’s not a static process it’s changing over time and place. There are possibilities and breadcrumbs to follow,  but is the a wire thread going from A to B? Is it a red, linear tread, or is it a big tangle? I don’t think you can sort it out alone and we have to learn to trust the unpredictable.

I started this text by quoting Sartre and his thoughts about emotions. If I have a starting point to why I do art, it could be in some of what Sartre writes;

“Existentialism is a tradition of philosophical enquiry that explores the nature of existence by emphasising experience of the human subject—not merely the thinking subject, but the acting, feeling, living human individual. In the view of the existentialist, the individual’s starting point is characterised by what has been called “the existential angst” (or, variably, existential attitude, dread, etc.), or a sense of disorientation, confusion, or anxiety in the face of an apparently meaningless or absurd world”. – Jean Paul Sartre: Existentialism, Christian J. Onof

And then comes another layer to these works, another breadcrumb another story. I have been very ill in the last year and my whole life became very physical. My body has made me aware of that I have a body. It has also reminded me on that I am mortal. There’s a tragicomedy and desperation in what I’m trying to say in my artistic practice. It is a desperate cry and even though I write I’m not going to tell you it will be okay we have to as a human beings try our best to avoid l’ennui, because it is always contre-révolutionnaire. 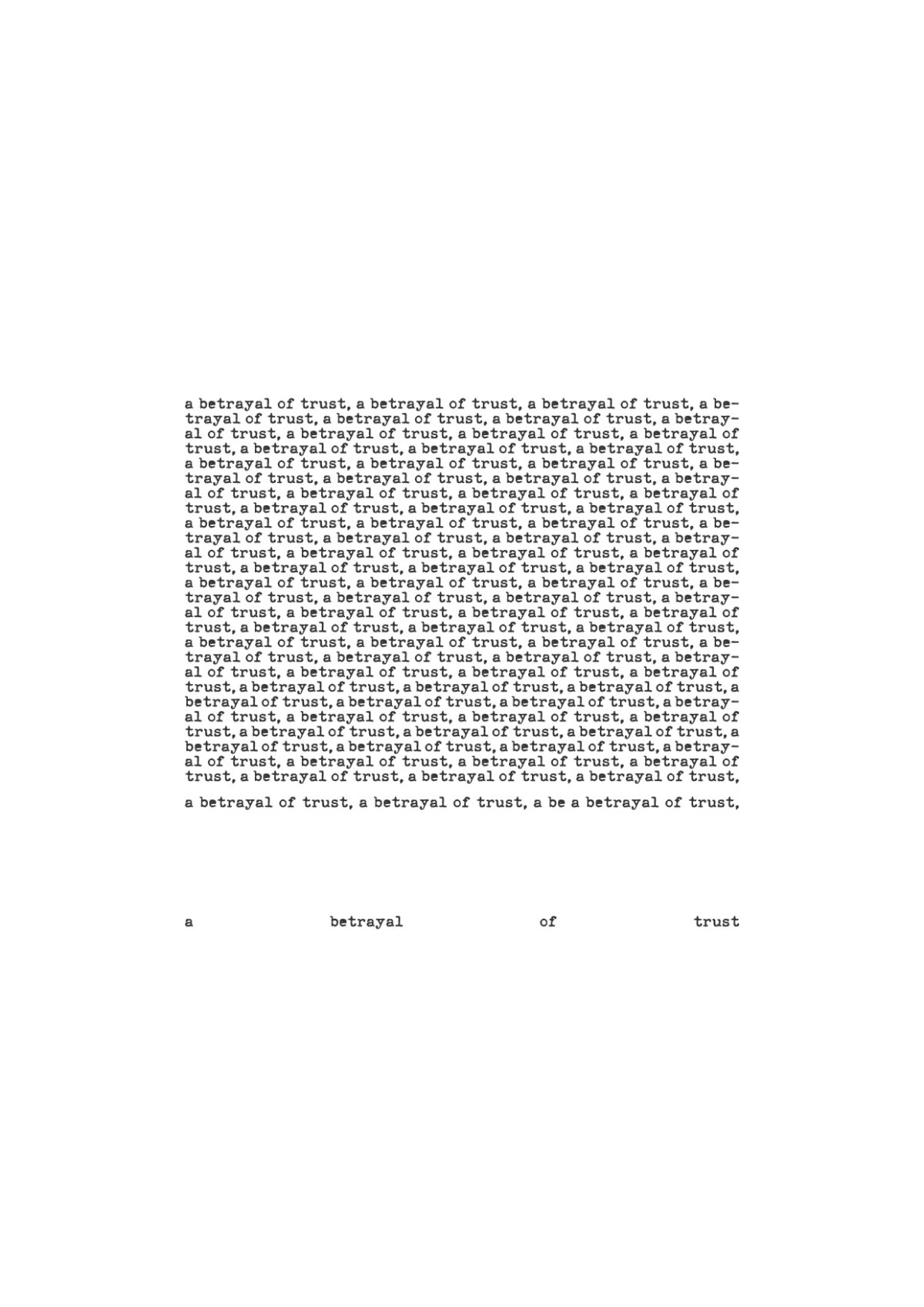 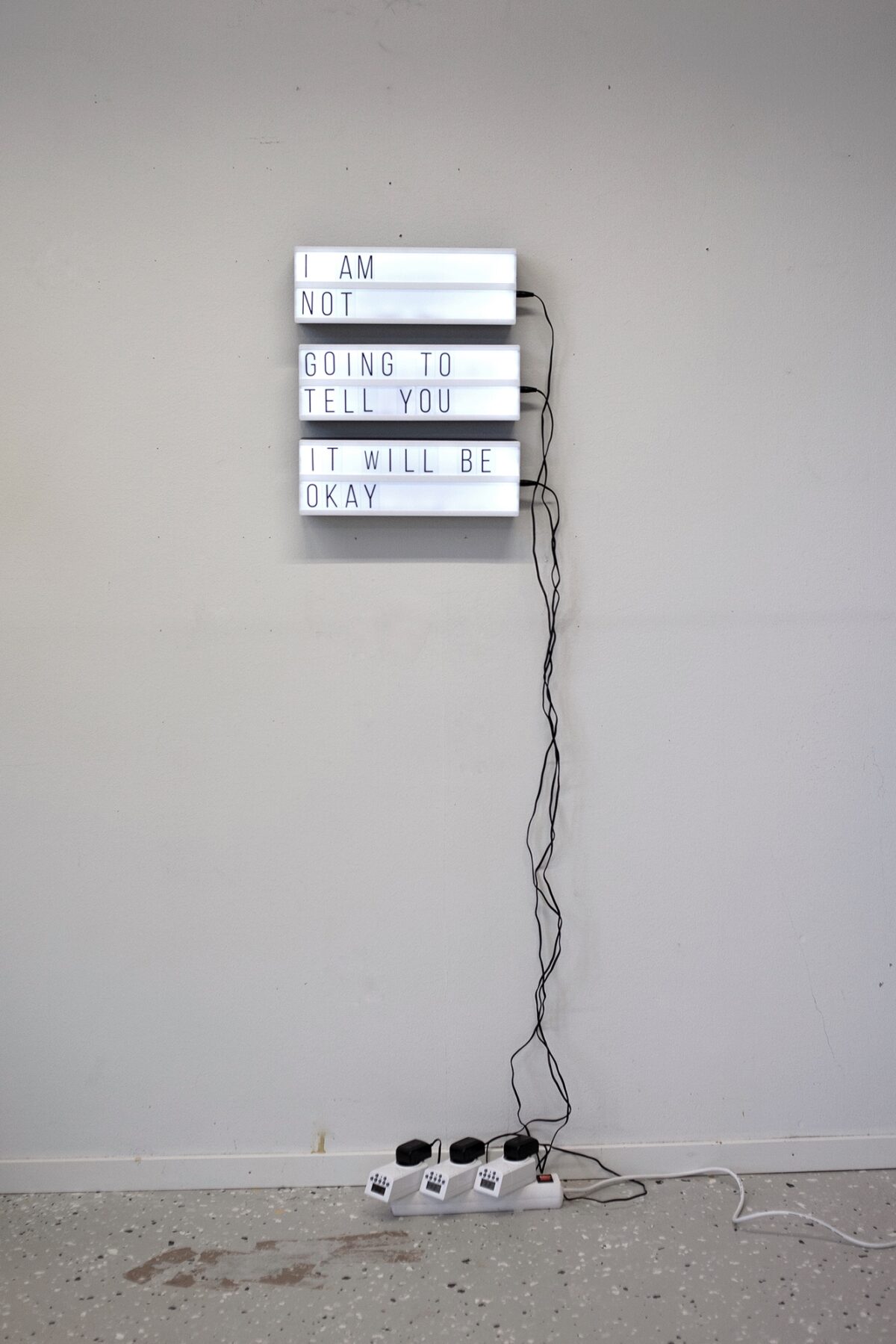